The MotorLand Aragon road racing circuit was opened in 2009 and in 2011 it became the fifth Spanish track to host the WorldSBK™ Championship.

WorldSBK 2019
Race Round 3   Aragon Round Aragon

Leon Camier and Ryuichi Kiyonari both concluded their Spanish weekend today at Aragón inside the points zone, finishing in 13th and 14th place respectively in Race 2. The same can’t be said for the day’s earlier Superpole race where they finished in slightly better positions, 12th and 13th, but outside… read more.

WorldSBK 2019
Race Round 3   Aragon Round Aragon

The first race making up the Spanish weekend of Aragón saw a determined Leon Camier push hard to finish just outside the top ten, in eleventh position. Although not a result that can truly satisfy the Brit and the Moriwaki Althea Honda Team, it nevertheless marks a step forward in… read more. 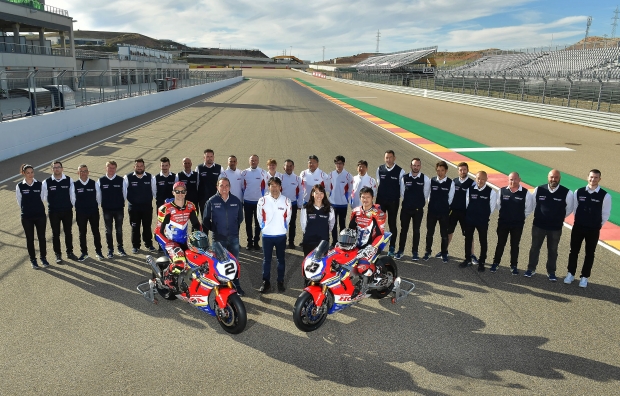 Camier back on track in mixed conditions at Aragon; Kiyonari faces the Spanish track for the first time

On a day of rather cold temperatures and with very light rain falling at various points during the afternoon’s session, Leon Camier was back aboard his CBR1000RR after being declared fit to race by the Medical Centre yesterday afternoon. Conditions were not ideal for team-mate Ryuichi Kiyonari either, facing the… read more.

WorldSBK 2019
Preview Round 3   Aragon Round Aragon

Leon Camier and Ryuichi Kiyonari are preparing for the first European round of the 2019 Superbike World Championship, which will be held next Friday – Sunday in Spain, at the Motorland Aragón Circuit in the municipality of Alcañiz. It will be a double challenge for the Moriwaki Althea Honda Team… read more.